Sri Lanka .. routinely to bomb its own citizens

"Sri Lanka is the only country in the world routinely to bomb its own citizens."

The USA/CIA supports the Sri Lanka government with intelligence, reconnaissance
and weapons .. to commit genocide against tamils.

Lasantha seems to have been on Mahinda Rajapkasa’s hit list from 2006. Here is an excerpt:

Editor-in-Chief Lasantha Wickrematunge received a phone call on his mobile at 11:13 am on January 11, 2006. The man who ultimately came on-line at the other end was the elected Executive President of the Democratic Socialist Republic of Sri Lanka: His Excellency Don Mahendra Percy Rajapakse.
Rajapakse had a lot to say, and he chose his epithets carefully from the choicest available in the Sinhala lexicon. Here is a reminder of some of the things the President said:
“F**k your mother, you son of a bloody wh**e!”
“I will finish you!”
“I treated you well all this while. Now I will destroy you. You don’t know who Mahinda Rajapakse is. You watch what I will do to you!”
Not quite, perhaps, what his alma mater, Thurstan College, expected of its alumni

The full article can be found at:

Lasantha Wickramatunga, the Chief Editor of the English weekly, the Sunday Leader, and one of the most senior and prominent journalists was fatally injured this morning, January 8, 2009, by two gunmen who followed him on his way to work. He noticed the two men following him on a motorbike and through his mobile telephone informed several of his friends. His death was reported this afternoon of head injuries despite of strenuous efforts by a medical team to save him. Mr. Wickramatunga was a primary target of the Rajapakse regime and particularly the Secretary of the Ministry of Defence, Gottabaya Rajapakse. An unsuccessful attempt was made to arrest Mr. Wickramatunga which was prevented by some senior police officers who refused to arrest him and also due to strong intervention on the part of journalists who gathered at his premises. Thereafter the printing press of the Sunday Leader, which was situated close to a security zone was attacked and burned by a group of unidentified persons who were never arrested. It is widely believed that the group was sent by the ruling party and was probably from some section of the armed forces.

Just two days earlier about 20 unidentified attackers raided the premises of Sirasa TV and caused damage amounting to Rs. 200 million to the communications equipment. The group assaulted the staff and left a Claymore mine said to weight eight and half kilograms. Sirasa TV is the most important centre for the independent media in Sri Lanka. The opposition leader said that the government is responsible for the attack and that members of a military unit carried it out.

In protest against these attacks the opposition United National Party walked out of parliament this afternoon. The earlier attack on Sirisa TV provoked protests from journalists and the opposition and also from foreign embassies including the United States. Following the attack the AHRC issued a statement entitled, SRI LANKA: The attack on Sirasa TV an early warning of worse things to come, which predicted:

The massive attack on the Sirasa TV station brings gloomy predictions of things to come in the very near future to a country which is already bedeviled by lawlessness, violence and corruption………. However, there is no rational basis to expect things to become any better but, in fact, reason to believe that worse things are yet to come. If there was to be political assassinations of opposition leaders, trade union leaders, journalists, human rights activists and others who stand for democracy, rule of law and human rights it would be the natural course of things arising out of a buildup which has already taken place.

In less than 48 hours this prediction has been unfortunately proved true. Both the attack on the senior editor Lasantha Wickramatunga and Sirasa TV appears to be part of a scheme to physically exterminate a number of persons that seem to have been listed as undesirables by this regime. In all likelihood many other unidentified gunmen must be lying in wait for opposition members of parliament, for independent journalists, for lawyers appearing against the government or against prominent leaders of government in courts and for judges making unfavourable decisions against the government. The Rajapakse regime is pursuing a murderous course which is likely to claim many more lives.

The political aim of such attacks is the establishment of a dictatorship with the help of some sections of the military. Military spokesmen now frequently speak in the state media and directly or indirectly attack the opposition, blaming that the criticism against the government creates divisions in the country at a time when unity is required to defeat terrorism. Many spokesmen for the opposition parties have blamed the government for using the ‘war’ against the LTTE as a propaganda ploy to suppress and eliminate the opposition.

The Asian Human Rights Commission once again raises the alarm, locally and internationally, about the situation of tremendous repression that is being unleashed in Sri Lanka, particularly in the capital which may claim many lives and attack liberties. It is time to express active solidarity for all persons, opposition political parties, trade unions, journalists and all others who will now have to brave these terrible attacks. The army victories in Kilinochchi seem to be leading to a celebration of the shedding of the blood of the government’s opponents. If the local and the international community ignore this situation it may once more have to regret yet another situation of carnage.

Hellow Everyone,
This is sad that we all talk from out of Sri Lanka, Educated people are out of sri lanka becouse thay know till this un-educated, money eating ministers and THE Rajapaksha family there that they cannont do anything????? basil and gotabe was working in petrol shed in USA and one is US CITIZEN and other is GREEN CARD HOLDER??? HOW CAN THAY RUN OUR COUNTRY THEY GAVE UP SRI LANKAN CITIZEN SHIP FOR US. AND BASIL DID NOT HAVE ANY MONEY WHILE HE WAS WORKING IN US, NOW HE JUST PURCHESED A HOUSE FOR 2MILLION DOLLARS. WHER DID HE GET THE MONEY??????? ONCE A TRADER IS ALLWAYS A TRADER, HE WILL STEEL ALL OUR MONEY AND LEAVE TO USA. W

Transparency International Sri Lanka joined the almost 10,000 people who marched alongside the cortege of slain journalist Lasantha Wickramatunga as it travelled from the Assembly of God Church in Narahenpita to the Borella Cemetery yesterday. The crowd who gathered to pay their last respects to Wickramatunga chanted slogans placing the responsibility of the assassination on the Government and the President.

Wickramatunga, the Editor of the Sunday Leader was a fearless journalist who bravely fought corruption till the very end. He was gunned down last Thursday by armed men on motorbikes as he travelled to work.

His work was supported by the many thousands of public service whistleblowers who believed that he was the man to go to if they wanted to expose corruption. They told him of their experiences with corruption and fraud in their offices. Through relentless and uncompromising investigations Wickramatunga was able to bring to light many incidents of corruption and fraud in the Government, even when his life was under threat.

It was for this courage and persistence that Wickramatunga was honored in 2000 by Transparency International when he was awarded the very first Integrity Award. The award honored courageous individuals from around the world who battled corruption. Many chapters of Transparency International have condemned the assassination of Lasantha Wickramatunga and have expressed their solidarity with the people of Sri Lanka in this dark hour.

The assassination of Lasantha Wickramatunga is an attack on the freedom of expression, a challenge to the people’s right to information and a lethal blow to democracy. Yesterday’s demonstration of massive public support should surely compel all those in positions of power to take immediate steps to put an end to the brutal suppression of the media, and establish a country where democracy is practiced, not just preached, and all citizens are informed, secure and free to speak their mind.

Sri Lanka's Marxist party, Janatha Vimukthi Peramuna (JVP) today alleged that the Central Intelligence Agency (CIA) of the U.S. is planning to station its troops in the Trincomalee harbour region… MP Dissanayake charged that the U.S. is planning to install missiles in or around Trincomalee under its 'Brahmaputhra Plan'. According to the MP the agreements have been signed for this process. Responding to JVP MP’s allegations, Foreign minister Rohitha Bogollagama said the U.S. team including the Major General was in the island to lay the foundation stone for two new schools in Trincomalee. According to an announcement by the U.S. Embassy in Colombo, the U.S. Government, through the U.S. Agency for International Development (USAID) and the U.S. Pacific Command, is rehabilitating five schools in Trincomalee District and one hospital and two schools in Batticaloa District……(Colombo Page, 20 Jan 09) 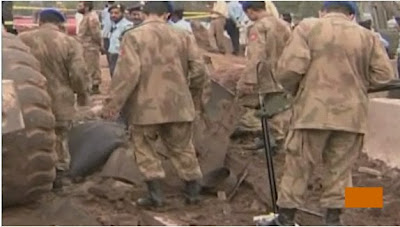 Geiger Counter? Radioactivity bomb?
LAHORE - Lawyers have drawn parallels between the Marriott-attack and 9/11 blaming America for executing both of them.Chairman Save Judiciary Committee (SJC) Abdul Rashid Qureshi and secretary Mian Jamil Akhtar through a statement on Monday ruled out suicide bomb at Marriot and maintained that it was an attack which was operated automatically. Expressing their sympathies with the victim families, they said the eyewitnesses and the circumstances do not lead to believe that it was a suicide attack but the one operated automatically in which America is directly involved...
Posted by u2r2h at 6:56 PM