US TV show to discuss 911 conspiracy.

But not the media!

The MUST NOT DSCUSS IT.

Isn't interesting how the US media non-handles the hot potato?

san fran chronicle phantastically manages to not mention it at all
http://www.sfgate.com/cgi-bin/article.cgi?f=/n/a/2009/04/02/entertainment/e034856D56.DTL

The Hartford Courant has no problem talking about 911 inside job as if
it was just a great football game.
http://www.courant.com/entertainment/tv/hc-rescue_me.artmar22,0,6562062.story

some people are even frothing at the mouth:
http://www.irishcentral.com/ent/Somebody-please-Rescue-Me-from-911-conspiracy-theories-42524167.html

Things have been so quiet at the New York City firehouse Truck 62, you might think it's closed.

It's been 16 months since the last fire call came at the station at the center of the cable hit "Rescue Me." Blame the 2008 writers' strike. >>Work was not only delayed, as it was for scores of other series, but finished episodes were kept from running because of all the other FX series that had to get on first. 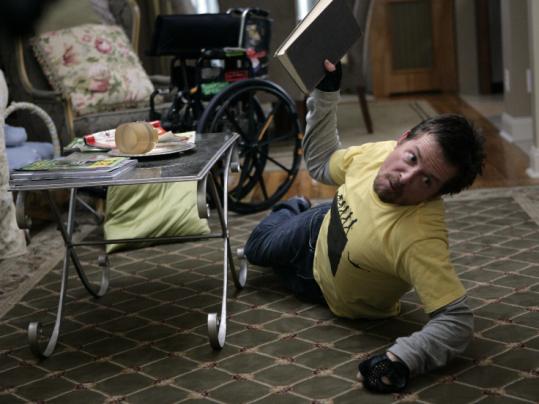 Now, like the kind of flare-up the firefighters routinely battle, the acclaimed series starring Denis Leary is back with some intensity.

The premiere of an extra-long fifth season of "Rescue Me" comes April 7 and to help herald it is the first-ever "Rescue Me Comedy Tour," which stops Saturday at the Mohegan Sun with Leary and two other stand-up comedians also in the show's cast, Lenny Clarke and Adam Ferrara.

It's Leary's first stand-up tour in 12 years, and the cross- Connecticut trip from his home in Roxbury to the casino in Uncasville is intended to drum up interest in the fifth season of the show. >>Leary, 51, serves not only as star of the tough and fiercely funny firefighting series, he's also a writer, executive producer and co-creator with his longtime collaborator Peter Tolan.

The return of "Rescue Me" at long last will cap an active year that saw Leary publish a new book in "Why We Suck: A Feel Good Guide to Staying Fat, Loud, Lazy and Stupid" and earn a Emmy nomination for his role in the HBO film "Recount."

After four, 13-episode seasons of "Rescue Me," the fifth boasts 22 episodes that will run all the way to September. Last month, FX ordered an 18-episode sixth season for next year. And even that may not be enough to tell the story of angst-filled firefighter Tommy Gavin and his world.

"We're coming to the end of this run, going, 'Man, we've got stories that just can't wait to be told,'" Leary told reporters at the TV writers' press tour earlier this year. "That's really a credit to the actors because we have never found ourselves bored as writers this year at all."

That was a good thing, since "Rescue Me" is a series that's written on the fly.

"We write as we go," Leary says. "We're always two episodes ahead at the most because we like to sort of let it gestate with the actors so we can see what the actors are doing and how their characters are interacting."

Such adjustment, he says, "keeps it very alive. It makes it a little bit more crazy in terms of the writing process, but we're coming to the end of 22 episodes, and I'm telling you the stories are bursting at the seams."

It was the smoldering aftermath of 9/11 that permeated the initial season of the show in 2004. Tommy's dead firefighter cousin returned as a ghost, his pal Lou wrote a lot of bad poetry about it and other guys in the firehouse were getting action from women as a result of being declared heroes.

Leary brought a special insight into the characters and the tragedy, as his cousin died in the 1999 Worcester warehouse fire that killed six firefighters.

And while the immediate shock of the attack fades as Ground Zero is rebuilt, it comes back in the new season through several stories. One involves a foreign journalist who wants to interview the guys for a book she's preparing for the 10th anniversary of 9/11.

"We thought, boy, in real life that would just be such a dagger for these guys, because they've really been trying to get over it," he says.

Tolan says the story line is also a commentary on "commerce being spawned by 9/11."

Renewed interest in the tragedy "gives my character Lou the opportunity to kind of try to re-flame the fires of him thinking of himself as a literary giant for a little while," says actor John Scurti.

More explosively, a return to the issue will give them a chance to address a more hot button issue: 9/11 conspiracy theories.

"There are alternative theories about what really happened on 9/11. They're not discussed a lot in the press. And I think that the way the show addresses the issue is going to be socio-politically provocative," says Daniel Sunjata, whose character, Franco Rivera, will bring them up. "I'm really gratified that they allowed that to be focused through my character, because I happen to subscribe to a lot of those theories and beliefs that 9/11 was an inside job."

"That's part of the reason why we wrote it," Tolan says, referring to Sunjata's theories. "Obviously, not all of us buy in. But we went, 'wow, that's interesting, and he's passionate about it. Let's use that.'"

"What's also great is my character, who became a firefighter because of 9/11, looks for answers from Danny's character," says Michael Lombardi who plays firefighter Mike Siletti. "So both sides are really played well."

"It creates a great rift in the firehouse, which is a circumstance that has happened in several firehouses in New York, where some of the younger members don't even have to completely buy into the theory of 9/11 being an inside job, but want to discuss it," Leary says. "On set I was like, man, the energy in the room is insane. And then, when you saw it cut together, I was like, wow, this looks like somebody's going to kill somebody, which is what we were looking for, that kind of spark to it."

More immediately, the series will deal with Gavin's issues following the death of his father (played by Charles Durning); his ex-wife's new flame (played by Michael J. Fox); Siletti buying a bar with the proceeds of his mother's estate; and a new boxing career for Franco, which involves Lou as a trainer and Ferrara's Chief "Needles" Nelson as manager.

"As far as acting, it's great," Ferrara said over the phone from the "Rescue Me" set this week. "One day it's very dramatic and physical, and the next day it's the funniest thing you've seen."

The comedy tour will give the cast a chance to work together in a different format, onstage. "We'll do some stand up and show some clips from the show and help promote the premiere," Ferrara says. "It will be a fun night, something you won't be able to see anywhere else."

FX is owned by News Corp.

See other posts here for more information on why 911 was an inside job and exactly how they did it....