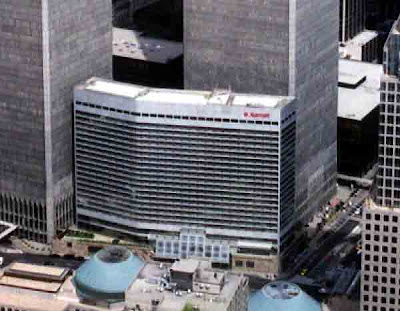 Bill Biggert's shot of wreckage from the disintegrating South Tower tumbling onto WTC 3. 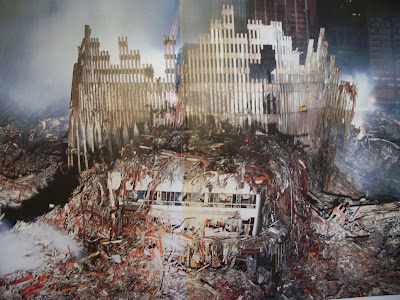 After the North Tower collapse only part of the bottom three stories of WTC3 remained, the lobby stayed intact with pictures still hanging on the wall.

The total disappearance of the top nineteen floors of WTC 3 and all except the north wing of WTC 4, the holes in WTC 5, and the massive hole that went right thru to the sub basements of WTC 6 visible in the above pic

Which secret weapon can pulverize building into such a huge extent of fine dust?

• Missing debris from two-thirds of the Towers.

• 50-ton corner beams from WTC 1 and 2 flung upward and across streets to pierce neighboring buildings nearly 400 feet away.

If fissionless mini nukes were used, radiation would be nil. But whether fission or fissionless types were used, they also were now “directable,” so the effects would be confined inside the Towers and WTC 7—and away from damaging the “bathtub” under WTC 1 and 2

Proof that the planes were a hologram

Holography is the explaination.