Gaddafi wants to carve up and liquidate Switzerland

Jewish Anti-defamation League and Gaddafi say Switzerland is financing international terrorism!!
ADL: Switzerland financing terrorism
US-based Anti-Defamation League slams multibillion dollar deal Geneva struck with Iran for supply of natural gas. Full-page ads in major newspapers proclaim Switzerland world's 'newest financier of terrorism'
Associated Press Published: 04.08.08, 17:46
A major US Jewish organization on Tuesday stepped up opposition to a multibillion-dollar Swiss-Iranian natural gas deal by claiming it makes Switzerland ''the world's newest financier of terrorism.'' ... ''When you finance a terrorist state, you finance terrorism,'' said the New York-based Anti-Defamation League in full-page advertisements in major Swiss newspapers and in similar ads in The New York Times, The International Herald Tribune and The Wall Street Journal. The US government and the World Jewish Congress have criticized Switzerland for the deal, saying it gives encouragement to Tehran's hard-liners. ''ADL is concerned that Iran's profits from the energy deal could help the regime to accelerate and complete its nuclear weapons program and provide tens of thousands of additional missiles to Hizbullah and Hamas, two terrorist groups and sworn enemies of Israel who routinely benefit from Tehran's largess,'' said a statement on the league's Web site. The version of the ad in The International Herald Tribune on Tuesday began, ''Guess who is the world's newest financier of terrorism? Switzerland.''


Mummar Gaddafi plans to officially ask the United Nations to eliminate Switzerland from the map. The Libyan leader first made the comments at the G8 meeting in Italy in July, but it was largely ignored by the world leaders.

He also said at the G8 meeting that Switzerland is ‘a mafia world, and not a country’. Gaddafi has apparently notified others that he will make his request during his first-ever visit to, and speech at, the UN General Assembly.

He’s scheduled to speak on September 23, just after US President Barack Obama.


My german Friend tells me the verbatim wording is thus:

Libya is working on an explosive UN resolution:
The UN general assembly is to resolve that Switzerland has to vanish from the map.
Swiss territory is to be split up (and adjoined to neighbor states)

REASON:
SWITZERLAND IS A ROGUE NATION AND IT SUPPORTS INTERNATIONAL TERRORISM

The german-speaking part will be joining Germany, the french area goes to France and the Italian province can be assimilated by Italy!
Read more: http://tangibleinfo.blogspot.com/2009/09/explosive-gaddafi-wants-to-disolve.html

it is now confirmed on Swiss Television!!!!

At the next UN meeting he will provide proof that SWISS corporations and banks are terrorists!! The solution to take care of such a lawless state is to disolve the WHOLE COUNTRY and split it up. The german-speaking part will be joining Germany, the french area goes to France ..etc

Swiss Radio FAILS to mention the REASON for Gaddafi's demand to dissolve Switzerland!

SWITZERLAND IS A ROGUE STATE AND IT'S SUPPORT FOR INTERNATIONAL TERRORISM

it IS mentioned in the TV broadcast!!

The world's criminal money in Swiss tax-haven!!
Profits are made with scarcity and fear.
Scare-city!

Gadhafi is to make his first visit to the United States this month (September 2009) to address the United Nations.
UNITED NATIONS — U.S. Ambassador Susan Rice said Gadhafi — like all other heads of state — would be expected to limit remarks to the topic at hand — containing the spread of nuclear arms — and keep them to 5 minutes. Libya holds a seat on the Security Council, the powerhouse arm of the U.N., until the end of this year.
HOW TO SPELL GADDAFI:

at least 12 different ways to spell the colonel's handle, including Qaddhafi (New York Review of Books), Qaddafi (New Republic), Gaddafi (Time), Kaddafi (Newsweek), Khadafy (Maclean's), Qadhafi (U.S. News & World Report), Qadaffi (Business Week), and Gadaffi (World Press Review). Libya's UN mission, in an effort to spread further confusion, spells the name Qathafi, and I know I've seen Gadaafi somewhere. To make matters worse, the Library of Congress and the Middle East Studies Association, to whom one would ordinarily look for guidance, have a fondness for Qadhdhafi, which is an abomination unto God. I think you now begin to grasp the dimensions of the problem.

Some publications have used several spellings over the years; unfortunately, the result has not been a stylistic convergence, but rather a prolongation of the dismal status quo. In 1973 Business Week started out with Qadafi, which had the advantage of simplicity, at least; unfortunately, almost no one else used it, and BW sheepishly changed to Qadaffi. As of December 30, 1985, the usually punctilious New Yorker was spelling it Khadafy; by January 20, 1986, this had inexplicably morphed into Qaddafi. The Wall Street Journal initially used Qaddhafi, but now has shifted to Qadhafi. My personal feeling is to chuck all the preceding and just call him Poohead, which is easier to remember and has an undeniable evocative power as well. But to each his own. Things are only slightly less muddled with Mr. K's (or Mr. Q's or Mr. G's, as you prefer) first name. Biz Week originally had it as Muammer, and the New Yorker used to say Moammar, but now both have changed to Muammar. For a while, in fact, it seemed that Muammar (sometimes written Mu'ammar, but let's not get picky) might become the standard--until the Desert Fox himself threw a monkey wrench into things, as he is wont to do. But more on this anon. The basic problem here is that (1) there is no generally accepted authority for romanizing Arabic names, and (2) the Mummer's name contains several sounds that have no exact equivalent in English. In standard Arabic, the initial consonant qaf is pronounced like a throaty k, midway between the English k and the German ch, as in Bach. The second consonant, dhal--two dhals, actually--is pronounced like a double dh, which is similar to English th, only with the tongue pulled back a bit behind the teeth. Regional pronunciation differences further complicate matters. Libyans tend to pronounce qaf like a hard g, which has inspired a whole different set of spellings. 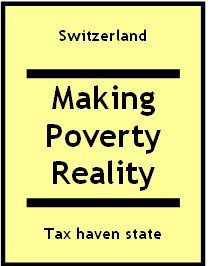 The 300 wealthiest people in Switzerland have assets totalling a record SFr625 billion ($571 billion) - over a quarter of the country’s gross domestic product (GDP).

Switzerland is a tax haven for foreigners who become resident after negotiating the amount of their income subject to taxation with the canton in which they intend to live. Typically taxable income is assumed to be five times the accommodation rental paid. French-speaking Vaud is the most popular canton for this scheme, thus it is usually called "forfait fiscal". For businesses, the canton of Zug is popular, with over 6000 holding companies.

Even the USA wants to control Swiss Money Crime Secrecy