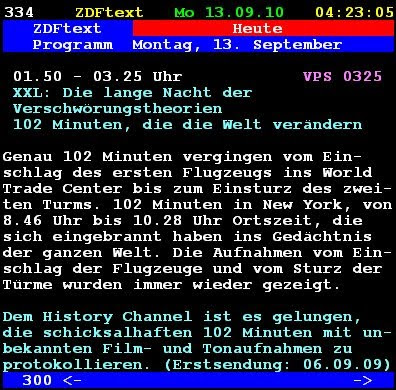 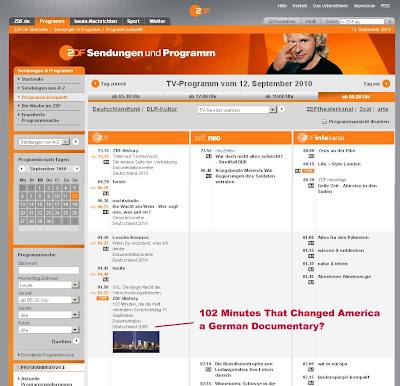 click on the image to enlarge it!
It is the MOST AMAZING DOCUMENTARY!
A MUST SEE!
It screened (with german subtitles) on 13.September 2010 at 1:50 am on ZDF (German TV) in a

(download the movie in avi divx format via torrent)

102 Minutes That Changed America is a 102-minute American television special documentary film that was produced by the History channel and premiered commercial-free on September 11, 2008, marking the seventh anniversary of the 2001 attacks. The film depicts, in virtually real time, the New York-based events of the attacks primarily using raw video footage from mostly amateur citizen journalists. The documentary is accompanied by an 18-minute documentary short called I-Witness to 9/11, which features interviews with nine firsthand eyewitnesses who captured the footage on camera.

According to this film, most of the archival footage was in possession of the U.S. government but was released to History years after 9/11. The documentary film attracted 5.2 million viewers.
The program aired on Channel 4 in the UK, France 3 in France, History Channel in Brazil on 07 September 2009, and SBS6 in the Netherlands on 09 September 2009.