Odd Engström HEART ATTACK -- one day before he was to TELL ALL about the Estonia.

On 23 March, Tom Valentine of Radio Free America interviewed veteran nuclear physicist Galen Winsor, who said the blast was not caused by a low-yield conventional explosive charge. Galen Winsor went much further than this. "I'm sure it was just exactly what John McPhee predicted 20 years ago in his book, The Curve of Binding Energy" he said, "where McPhee quoted Theodore B. Taylor, a theoretical physicist out of Los Alamos, who said that someone someday was going to blow up the World Trade Centre with a small nuclear device, the size of a stick of gum." Winsor continued, "McPhee's book was published in 1975, although the prediction first appeared in the New Yorker magazine in 1973. Taylor worked in the area of the micronization of nuclear weapons, in other words making nuclear weapons small enough so the Israelis could carry them around in a briefcase." At first glance the thought of micronized nuclear weapons being used in major cities seems absurd, but there is now considerable evidence indicating strongly that small nuclear devices were also responsible 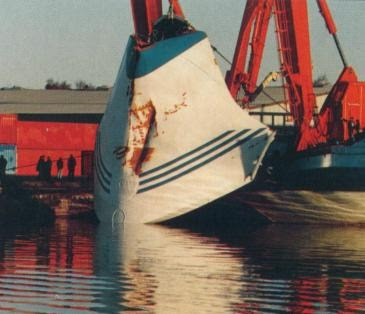 Was the sharp buckle in the visor caused when the 'Estonia' collided with the aft fin of a partly submerged submarine?

Shocking new revelations indicate that clandestine shipments of Russian weapons technology, transported on a civilian passenger ferry under Sweden's watchful eye, were actually destined for an unknown nation in the Middle East.

Since the car and passenger ferry Estonia sank on September 28, 1994, there have been persistent rumors that a Middle Eastern nation was somehow involved in the catastrophe. A recent revelation from a Swedish customs chief that an earlier shipment of contraband military technology carried on Estonia had been secretly flown to an unknown destination in the Middle East – via Egypt – suggests that there is substance to these allegations.

There have been persistent rumors of Israeli involvement. A former East German intelligence agent, who claims to have worked with Mossad, told American Free Press in 2000 that Israel had been involved in the Estonia catastrophe, but did not provide details.

The odd presence of two young men, Hicham Ben Hamou, 29, and Mohamed Ben Tounsi, 21, listed as Moroccans on the passenger list raises some questions. While these two men are listed among the 852 who perished in the disaster, their names are not included on the list of victims whose families received compensation from the insurance company.

Why did no Moroccan relatives of Ben Hamou and Ben Tounsi come forward to claim compensation? One explanation might be that these men were not Moroccans at all, but agents of an intelligence service, and there are no legitimate Moroccan relatives to make a claim.

On November 30, 2004, a program on Swedish state-supported television (SVT 1) reported that there had been a secret arrangement between Owe Wiktorin, Sweden's highest military commander at the time, and Ulf Larsson, then general director of customs, to clear specific shipments of military technology from Estonia, without inspection, on arrival in Stockholm.

The program, based on the confession of Lennart Henriksson, former chief of customs for Stockholm's harbor, reported that at least two previous shipments of Soviet weapons technology had been transported on the passenger ferry on September 14 and 20, 1994.

This covert weapons smuggling agreement was authorized at the highest level of the Swedish government, according to Henriksson. This was confirmed in an official investigation of the arrangement conducted by a specially appointed judge, Johan Hirschfeldt. Hirschfeldt's report stated that this arrangement was known at the highest levels of Sweden's government and defense department.

The secret transport of Soviet weapons and technology on Estonia, however, turned the civilian passenger ferry, with its passengers, into a military target. This must have crossed the minds of the Swedish authorities involved in the smuggling scheme.

The prime minister of Sweden at the time was Carl Bildt, from the conservative party, although his term ended two days after the catastrophe. Immediately after the sinking, Bildt promised the Swedish nation that the wreck would be salvaged and the victims' bodies recovered. His broken promises and documented involvement in an illegal weapons smuggling operation notwithstanding, Bildt went on to become a darling of the internationalist elite, adopted by the U.S.-based RAND Corp. and made a special envoy of the U.N. in the Balkans, where he began serving in 1995.

While the wreck lies in international waters, Sweden has actively prevented an independent investigation into what caused the disaster. The Swedish state has passed an extraterritorial law to prevent its citizens from diving to the wreck.

Sven Anér, veteran Swedish journalist and author, has provided me with information about the Middle Eastern connection with the weapons smuggling on Estonia. This material was censored from the SVT 1 exposé and has not been reported in the mainstream press.

Lars Borgnäs, who produced the SVT 1 program, censored the most important information, Anér said. This was the fact that the secret military cargo on September 20 was not for the Swedish military but was en route via Egypt to an unknown destination. This raises the question of why Sweden would enable, facilitate, and cover-up another nation's crime?

Borgnäs told Anér he had omitted mentioning that the cargo was destined for a third country, via Egypt, out of "consideration for the parties involved."

Ingrid Sandqvist, customs chief at Arlanda confirmed to Anér that she had received orders to clear the cargo for forwarding via Egypt, although she did not "recall" having inspected it. Furthermore, Sandqvist said she did not know the origin of the cargo. Anér said he has the impression that Sandqvist had not been allowed to check the cargo, something she is supposed to do.

Lars Göran Farm, then marine engineer with Nordström and Thulin, Swedish co-owners of Estonia, confirmed to Anér that the ship owner had ordered a special escort from Vägverket, the Swedish highway authority, for a sensitive cargo on September 28, 1994. The Vägverket personnel, ready to escort the cargo from the harbor to Arlanda airport, left the harbor empty-handed after learning that Estonia had sunk.

The information that the previous shipment of military technology had been forwarded to a third country via Egypt suggests that the contraband cargo was not destined for the United States, Anér told AFP. Given the circumstances, the custom chief's report suggests that its final destination may have been Israel.

Israel and the U.S. have worked together on numerous military projects, such as the Tactical High Energy Laser (THEL), a high-energy laser weapon system designed to shoot down missiles. The THEL was developed by a team of U.S. and Israeli contractors working with TRW, later acquired by Northrop Grumman, for the U.S. Space & Missile Defense Command and the Israeli military.

Daniel Saul Goldin, NASA Administrator from 1992-2001, had been general manager of the TRW Space and Technology Group in Redondo Beach, Calif. prior to coming to NASA. Goldin bragged about how he cut key personnel at NASA and ordered the hiring of sub-contractors, especially "women-owned" and "minority-owned" firms. This policy resulted in serious breaches in security and espionage carried out by sub-contractors working at NASA. The massive thieving by Chinese sub-contractors of sensitive NASA information, recently reported by the computer programmer Clint Curtis to a congressional panel, is the result of Goldin's hiring policies.

Much of the research science that goes into the development of laser weapons like THEL is conducted at Russian research institutes in Moscow and Nizhny Novgorod.

Israel has close ties with former republics, such as Estonia. Shortly after regaining its independence in 1991, the tiny Baltic republic made a very odd purchase of used artillery pieces from Israel - for $60 million. Because many of the weapons didn't even function, the government of Estonia later sued to recover some of the money.

In the August 5, 2002 issue of American Free Press, it was reported that divers hired by the Swedish government to survey the vessel spent hours searching cabins on Deck 6 of Estonia for a black attaché case carried by a Russian weapons dealer named Aleksandr Voronin.

The divers worked for Rockwater, a subsidiary of Brown & Root Energy Services (BRES). Each diver had signed a lifetime agreement obliging them to remain silent about what they did on the wreck some 200 feet below the surface. BRES is a subsidiary of Halliburton.

Estonia researcher Jutta Rabe told me that Rockwater was not the lowest bidder, but got the job from Johan Franson, head of the Swedish Maritime Administration. "Secrecy," Rabe says, "was of paramount importance".

I has copies of the diving logs, which show that the sought-after attaché case was finally found in Cabin 6230, the cabin usually reserved for VIP guests or the relief captain, who was also on board.

Upon finding the case on Dec. 4, 1994, the diver asks his supervisor J. Barwick, "It says Aleksandr Voronin. Is this what we're looking for?"

Voronin is an Ashkenazic Jewish surname coming from the village of Voronino in the Bobruysk area of Byelorussia, according to A Dictionary of Jewish Surnames from the Russian Empire by Alexander Beider. The root "voron" means crow or raven.

Aleksandr, a member of the Voronin "business dynasty" from Kohtla-Järve on the Estonia-Russia border, owned a company in Tallinn called "Kosmos Association" while his relative, Valeri, had a branch company in Moscow which did business with the Kurchatov Institute, Russia's famous space technology and nuclear research center. Both Voronin companies were established to sell specimens of Russia's modern space and weapons technology.

Aleksandr Voronin was traveling on Estonia with Vassili, his 15-year-old son, and his father-in-law, Vassili Kruchkov. After being rescued, they told the press they were on a business trip to Denmark. Asked why they had not taken a plane, Aleksandr said he was worried that "high winds" could have delayed the plane.

When Aleksandr's wife, Larissa, heard about the sinking, she lit 33 Jewish ceremonial candles she had bought in Jerusalem on a trip to Israel. "I knew that these should only be lit in a dire or special occasion and that you should only burn them a little each time," she said. "I burned them to the end."

Fortunately, the three members of the Voronin family survived the sinking, but Aleksandr is said to have died of a heart attack at age 45, in 2002, two weeks after Sddeutsche Zeitung, a leading German newspaper, published details of his weapons and space technology business in connection to the Estonia catastrophe.

As AFP has reported, Rabe points to a group of Russian nationalists from the former Soviet intelligence agencies being behind the sinking. According to Rabe, the so-called Felix Group, which included Vladimir Putin, the current president of Russia, was opposed to the wide-spread plundering that occurred after the breakup of the Soviet Union.

The window of access to Soviet military secrets slammed shut in July 1998 when Putin became director of Russia’s Federal Security Service. The Voronin companies and some of the American firms that dealt with them went out of business.

According to Rabe, the sinking of Estonia is summed up:

"It was the perfect coup, which could have only been carried out by secret services or groups which include former members of the secret services as members, like the networks of terrorists, regardless of their origin or motivation."

At a PR-dinner arranged by Kinnevik AB at Stockholm the spring 1998 the director Odd Engström, former vice prime minister to Ingvar Carlsson, when the accident was investigated and colleague to Ines Uusmann, stated that the Swedish government had asked the Swedish members of the Commission to agree with Estonians to avoid quarrels, etc. A journalist (AO) asked for an interview with Odd Engström, where he should develop what he meant. Unfortunately the interview never took place - Odd Engström died of a heart attack at the age of 56 on a park bench the week after the dinner - early June 1998.

Mr Göran Sellvall, who was the government's head of staff and attended all crisis group meetings, died six months later in December 1998. He was 59