Afghanistan: Is It Mission Impossible?

As President Obama debates whether to send even more troops to the country, and the British death toll there rises, Eddie Mair chairs a debate at Chatham House in London about how close the west is to achieving its ambitions in Afghanistan.

What is its 'mission'? To close down terrorist cells in the country, making the UK a safer place? To introduce democracy, greater freedom for women, more electricity, water?

Taking part in the debate are:

Brigadier Buster Howes, who is the Head of Overseas Operations at the MOD.

Eric Joyce, a former major in the army and now a Labour MP. He resigned as an aide to the defence secretary, calling on Gordon Brown to make clear to the British people that the Afghanistan campaign was 'time limited'.

Lindsey German, a senior organiser of the Stop the War Coalition. 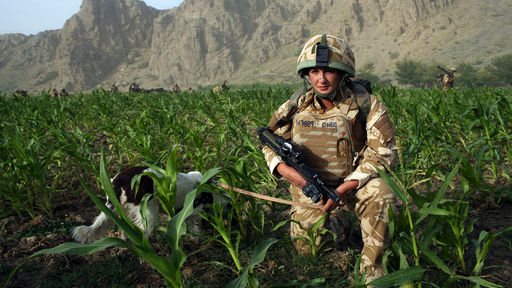 Most 'remain against Afghan war'

Read more about the poll on the BBC news website

( Have a local copy, leave a comment if you need it)

Most 'remain against Afghan war'

Most people in the UK continue to oppose Britain's military operations in Afghanistan, a BBC survey suggests.

The increase in opposition to the war is slight, despite the rising number of British soldiers killed in the last 12 months.

Three years ago 53% of those polled were opposed, and 31% were in favour.

This year the number of British military personnel in the country rose from 8,000 to just over 9,000 - the second largest deployment of any nation. Since 2001, 220 UK troops have been killed on operations in Afghanistan.

Half of all men surveyed said they were opposed to the conflict and 65% of women also expressed opposition.

Of the overall 56% of respondents against the operations, there were more opposed aged 65 and over than any other age group at 60%.

A cabinet sub-committee will meet on Thursday to consider how the Afghan operation is resourced, but it will not take an immediate decision on increasing troop numbers before consultation with Britain's allies, Downing Street says.

Gen Sir David Richards, the new head of the Army, is believed to want an extra 1,000 troops, according to Michael Codner, director of military sciences at the Royal United Services Institute.

But it is thought that the government may decide to send an additional 500 soldiers from the UK, with the other 500 being redeployed to Helmand province from elsewhere in Afghanistan.

Mr Codner says Britain needs to maintain its influence with the US with a consistent and reliable contribution of military forces.

"There is a financial and human cost in this strategy which the nation must either pay, or accept that it has lost its presumed status and influence and can relax and be a normal European country that does not take hard power seriously," he wrote in an article sent to the BBC.

The Ministry of Defence has confirmed that some soldiers serving in Afghanistan have had their operational tour extended because of "complex" handover arrangements.

Troops from 19 Light Brigade had been due to end their six-month tour this month, with soldiers from 11 Light Brigade due to be deployed in their place.

The MoD denies suggestions the delay is a result of ministers failing to reach a decision on whether to send more troops.

"The changeover of any brigade is complex. Given the nature of continuing operational tasks, uncertainties over the Afghan presidential election, and consideration by Nato of General McChrystal's strategic assessment, this changeover is more complex than most," a spokesman says.

Leave arrangements will be reviewed to compensate the affected units, he added.

The survey comes at the same time as a BBC Radio 4 panel discussion on Afghanistan, due to be broadcast on Wednesday 7 October at 2000 BST.

In it, Lindsay German, convenor of the Stop the War Coalition, said the conflict was "mission impossible" and would prove to be an "unwinnable war".

But Brig Buster Howes, head of overseas operations at the Ministry of Defence, insisted that "significant clear, tangible progress" was being made.

And Eric Joyce MP, a former aide to the defence secretary, warned that the fact the UK was making a "disproportionate effort in comparison with our allies" would affect the public's attitude towards the conflict.

He added: "We certainly have to celebrate everything our troops do on the ground, but we also have to listen very very carefully to what public opinion is saying and we haven't done enough of that up to now."

Afghanistan: Is it mission impossible? will be broadcast on BBC Radio 4 at 2000 BST on Wednesday 7 October.

Violence can only be concealed by a lie, and the lie can only be maintained by violence.
–Alexander Solzhenitsyn

War is a racket. It always has been. It is possibly the oldest, easily the most profitable, surely the most vicious.
–Marine Corp General Smedley Butler

Dollar hegemony: in part, its the notion that the US imperium is not simply predicated upon oil, but the supremacy of the dollar; in particular, the petrodollar. It goes toward describing how the US in particular requires a steady diet of petrodollars to maintain the massive debt and burgeoning trade deficit that underpins unprecedented levels of consumerism and consumption — the famous “way of life” that George Bush Senior notably declared was “non-negotiable” during his Presidency.

The Index was the brainchild of Australian entrepreneur and philanthropist Steve Killelea and developed by the Economist Intelligence Unit; 121 countries were examined in the study.

As a more complex mosaic of political and cultural complexity of international and internal affairs emerges, there may be some surprises –

In the Top 50, we have 6 countries or a healthy 10%+ of the rankings from the Middle East and North Africa — Oman, Tunisia, United Arab Emirates, Kuwait, Morocco and Qatar. If Africa is taken geographically, we can add 3 countries from the top fifty — Botswana, Ghana, Mozambique and Madagascar just off the mainland.

From Eastern Europe there are 9 countries represented in the Top Fifty; Asia and Oceania 10 countries; 5 from the Americas, North and South; and 16 from Continental and Northern Europe. See the full list of country rankings here, as well as two longer reports extrapolating from these findings here.

I haven’t mentioned how the USA or Australia ranked, so visit the website for more. There are three Anglophone countries in the Top Ten (well, maybe one and a half, as two of the countries are largely bi-lingual).